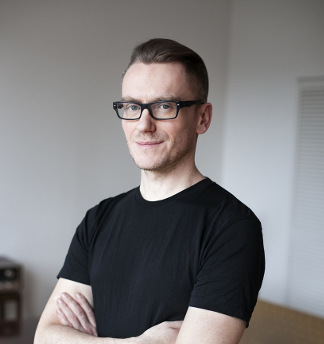 Łukasz Ronduda – born 1976, art historian, lecturer, curator, writer, screenwriter, director. Curator of the Museum of Modern Art in Warsaw, initiator of the Filmoteka Muzeum project. Academic teacher with a PhD degree, giving lectures and seminars on art history, aesthetics, as well as theory and history of film at universities both in Poland and abroad (notably at Princeton University and Columbia University in New York). Adjunct professor at the SWPS University of Social Science and Humanities, in the department of psychology. Researcher and expert in the field of experimental cinema. Graduate of a direction and screenwriting training programme at the Wajda School. Originator of the award for visual artists, presented by the Polish Film Institute and the Museum of Modern Art in the form of a grant for a feature film production. Director and screenwriter of a feature film The Performer (along with Maciej Sobieszczański), which received a Think: Film Award at Berlinale 2015. He also directed A Heart of Love (2017), a film depicting the relationship between artists Wojciech Bąkowski and Zuzanna Bartoszek.
He authored books: “Subversive Strategies in the Media Arts: Józef Robakowski’s Found Footage and Video Scratch” and “Polish Art of the 70s”, as well as co-authored (with Barbara Piwowarska) “Polish New Wave: The History of a Phenomenon that Never Existed”. He also wrote a novel “Half Empty”, along with Łukasz Gorczyca. Ronduda is also an editor of numerous collective publications, as well as over 200 articles about art and film, printed in academic journals and popular magazines.  He curated numerous exhibitions, i.a. “Niezwykle rzadkie zdarzenia” (Extremely rare events) at the Centre for Contemporary Art in Warsaw in 2009, the 2006 “Analogue: Polish video art from the 70s and 80s” at Tate Modern in London, “1,2,3… Avant-garde” in 2008 also at Tate, as well as “Operators exercises: Open Form Film and Architecture” at Columbia University in New York in 2010.